This is a working code for Bitly using v4 API to shorten a long URL. You can also create a copy of this sheet and bulk create bitly links using the function bitlyShortenUrl in the 3rd column- https://docs.google.com/spreadsheets/d/1TS-aQcDu3rRv-LexEoIqDiX0ydv69ijkXQP-nuQdBz4/edit#gid=0

On your OnePlus phone:

This Sunday morning, I was feeling a little wobbly. I easily get bored when I run out of fun activities. So today, I literally had whole day to myself without any concrete plans. I wondered how to make it exciting. Just then, a random idea stuck. Lets try doing some graffiti!

My handwriting sucks. I have literally zero drawing and painting skills. The last encounter that I remember with any sort of artsy drawing was in standard 5th, where I scored a respectable 6/10 for drawing a Mango tree, next to a flowing river. I colored the river purple. Yeah I was a rebel since beginning 😀

Back to present. I live in a rented apartment, so naturally I did not have the liberty to go all guns and smudge the interior walls with spray paints. However, what I could do was to use my makeshift whiteboard, which I otherwise use to write code and brainstorm, as a graffiti wall.

Now all that was left was to find an appropriate piece of art that is witty, uplifting and easy for a first timer. I found an interesting sketch of three kids with cute looks, ruffled hair and some mischief brewing in their mind. Just apt!

I used a blue marker to get started. It was a bit difficult in the beginning. I had to edit and erase the initial few curves. But soon I got the hang of it. I stated enjoying it! In less than ten mins I was done sketching the three kids. Here it is below [the left side]. 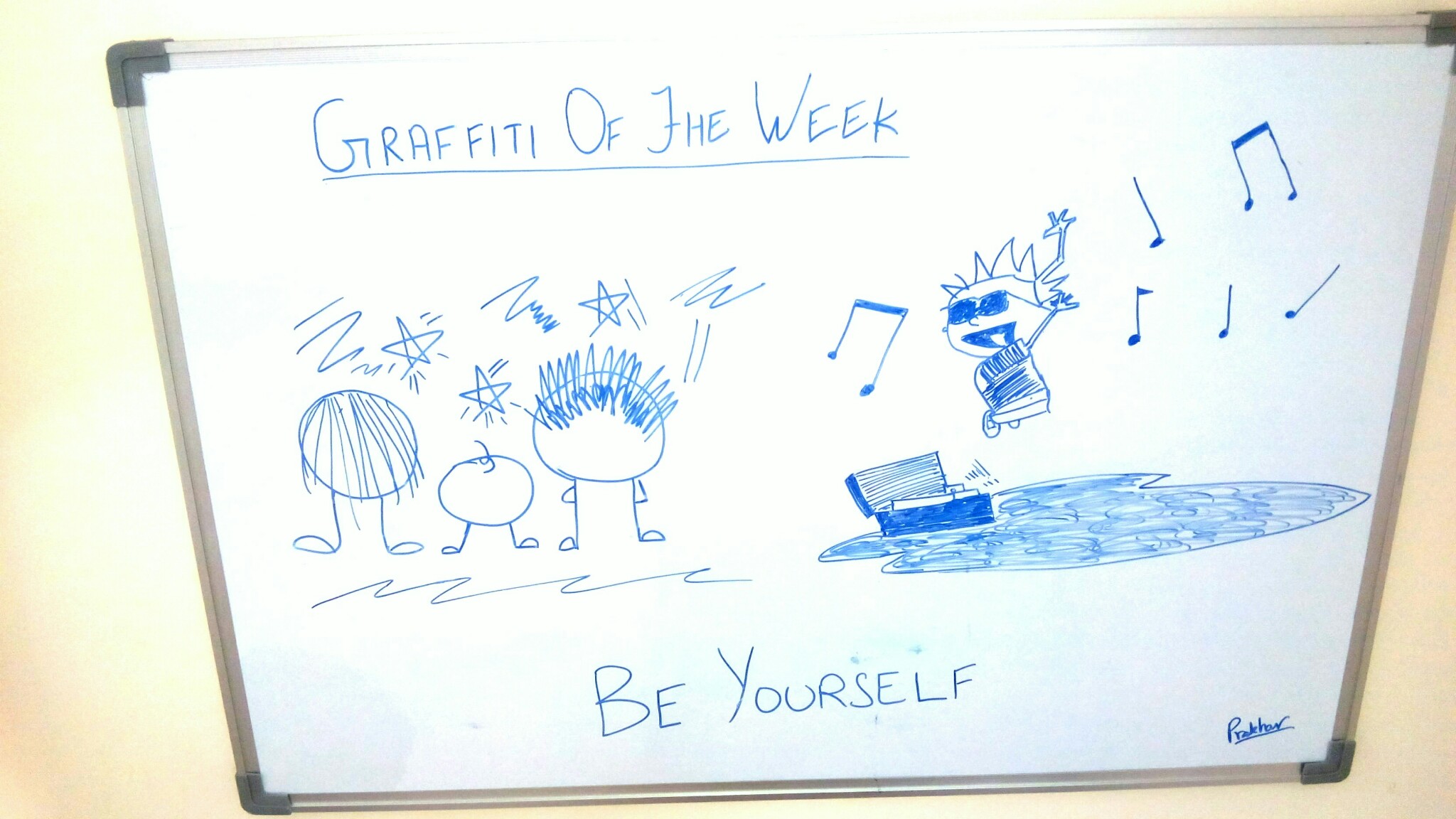 Since I completed the graffiti fairly quickly, I felt a little undeserving. To compensate for it, I found another interesting image from Calvin and Hobbes, where Calvin is having a gala time listening to his boom box. I inserted it into my debutant graffiti art as well.

After finishing, I admired it for a few minutes and indulged myself into some unabashed self appraisal 😀 . I throughly enjoyed the whole experience of trying out a new skill. I promised myself to try a new graffiti every week.

Calvin is a sweet little smartass. He hasn’t aged in decades and neither did his wisdom. His simple conversations with his pet tiger appear cute and simple. Yet, profound at the same time which makes this cartoon strip timeless. Here I have collected and posted some of the best quips taken from Calvin’s innocent mind:

Hobbes: Do you have an idea for your project yet?
Calvin:  No I’m waiting for inspiration. You can’t just turn on creativity like a faucet. You have to be in right mood.
Hobbes: What mood is that?
Calvin:  Last minute Panic.

Calvin:  Sometimes I think the surest sign that intelligent life exists elsewhere in the universe is that no-one of it has tried to contact us.

Calvin:  Reality continues to ruin my life. [Throw up his hands in the air, dejected ;)]

[Calvin walking on Snow, with contemplative expressions]
Calvin:  The problem with future is that it keeps turning into present.

Calvin:  Life’s disappointments are harder to take when you dont know any swear words.

Calvin: It’s hard to be religious when certain people are never
incinerated by bolts of lightning.

Calvin: In my opinion, we don’t devote nearly enough scientific research to finding a cure for jerks. [:D]

Calvin: (During a test.) As you can see, I have memorized this utterly useless piece of information long enough to pass a test question. I now intend to forget it forever. You’ve taught me nothing except how to cynically manipulate the system. Congratulations.

Calvin’s dad: Being a parent is wanting to hug and strangle your kid at the same time.

Calvin: If people sat outside and looked at stars each night, I’ll bet they’d live a lot differently.

Calvin: Do you know where babies come from?
Hobbes: Nope
Calvin: Well, I wonder how one finds out!
Hobbes: Here, let me see the back of your shirt.
[untucks Calvin’s shirt]
Hobbes: You came from Taiwan.

Lord, after sealing my destiny in poverty,

let his attitude be rich. I will summarise the entire process of getting a driving licence in Bangalore. Without Broker / agent or any driving school. Before starting, here is the checklist:

I have not completed 1 month yet, so haven’t appeared for Permanent licence. Will update the answer once I do so.

If you are using Terminal and have sent some processes to background using Control+Z, use the following commands to bring them back to foreground.

Type ps -a to view all background processes with pid. Or type only jobs, to view them in order.

Type fg to bring the last process back to foreground.

If you have more than one process running in the background, do this:

Type fg %3 to send the python process back to foreground.

To suspend the process running in the background, use:

To kill a python process either type exit() in python shell, or type Control+D